If you are looking for information on the Wendy's franchise business opportunity, Wendys franchises or Wendies franchising, then you have come to the right place. 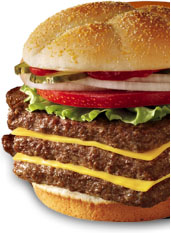 Wendy's is a chain of fast food restaurants based in Dublin, Ohio and owned by the United States corporation Wendy's International, Inc. There are over 6,600 Wendy's restaurants worldwide.

The chain is famous for its chili. Also, it is known for its Frosty dairy desserts, the fact that their burgers are square, its fresh and never frozen ground beef, and its making of all sandwich items to order. Unlike most fast food chains, Wendy's historically did not serve breakfast, except for stores in Puerto Rico. Wendy's tried serving breakfast in the mid-1980s, but the endeavor quickly failed. However, they have reformulated their breakfast menu recently and are now serving breakfast in many locations.

Wendy's was founded by Dave Thomas in 1969 and named after his 8-year old daughter, Melinda, who had the nickname of "Wendy." The corporate headquarters is located in Dublin, Ohio. The first Wendy's restaurant was opened in Columbus, Ohio on November 15, 1969, and grew rapidly to open over 3,000 stores by 1985. However, by the mid-1980s some Wendy's restaurants became underperforming and closed. By 1989, Dave Thomas came out of retirement and started doing commercials for Wendy's and helped rebuild the restaurant until his death.

After international expansion in the 1980s, the chain retrenched in the late 1990s. In 1999 it pulled out of London and Hong Kong (its Hong Kong branch was located on Lockhart Road in Wan Chai).

In 1995, Tim Hortons' popularity had spilled over to American investors; the chain's parent company, The TDL Group ("TDL" stands for the original corporate name "Tim Donut Ltd."), was acquired by Wendy's International, Inc.. As a result, Ron Joyce, Tim Horton's partner and first franchisee, was, for a time, the largest shareholder of Wendy's.