At Five Guys, we don't like to talk about ourselves very much. We would rather focus on making burgers. So if you're interested in franchising, we hope it's because you love our burgers, love that we have a simple menu, and want to serve great burgers in a clean and friendly environment with very little fuss. If you feel that way, then there isn't much more to say! 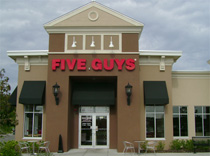 With the simple focus on quality, service and cleanliness, Five Guys has opened over 300 restaurants in less than five years. If you're interested in being a part of the Five Guys family, then fill out the form below to reach our Franchise Department. We will get back to you with an application and will let you know what areas of the country are open for development.

Five Guys is very proud of the recognition we've received in the press. Please read on to see what has been written about us.