Welcome To Boston's the Gourmet Pizza

Boston's the Gourmet Pizza is a full-service, pizza themed, casual dining restaurant and sports bar, offering pizza, pastas and a wide variety of other dishes, such as appetizers, sandwiches, ribs and salads.

Boston Pizza has been awarded the 1999 Ernst & Young Pacific Canada Entrepreneur of the Year for Hospitality and Tourism. The Financial Post and Arthur Andersen & Co. named Boston Pizza one of Canada's 50 Best Managed Private Companies for three consecutive terms. The company was also awarded the BCAMA Marketer of the Year Award, which recognizes the corporation as an aggressive industry leader not only in food-service, but also in marketing, promotion, and advertising. Boston Pizza, with its headquarters in Richmond, B.C., has a regional franchise office in Mississauga, Ontario.

The key to Boston's system has been its people. CEO and Founder Jim Treliving and CEO and Founder George Melville have assembled a winning corporate team that continues to make Boston's one of the most popular casual dining restaurant operations in North America.

Although both owners remain intimately involved in the day-to-day management of the company and travel extensively between the different offices they have also evolved in their roles as the company has evolved. George Melville has continued to provide leadership in the Vancouver Office, while Jim Treliving has primarily focused on the growth of the chain beyond its Western Canadian roots.

This strategy has led to a greater focus on development and a quicker transference of culture to new markets while the base business maintains focus and stability. 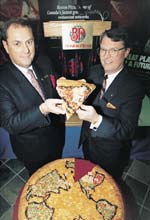 After 31 years in the business, partners Jim Treliving and George Melville still love the business they are in. Though they have sold off all but five of their restaurants to devote all of their attention to managing the corporate operations, their attitude remains the same as the day they entered the restaurant industry. "Think like a customer, deliver outstanding food value and work closely with your partners."

With over 38 years of experience, we have developed a unique and popular casual dining and sports bar concept. The Boston's concept offers what many restaurants don't - two experiences under one roof - a casual dining restaurant and a bar.

Boston's the Gourmet Pizza is much more than just a family restaurant; it's also great for groups or teams. Featuring a sports bar, the atmosphere is great for catching a game on the TV, or accommodating a team that's looking for a comfortable, relaxing place to have a drink and socialize after the game. Plus! Boston's stays open later than other restaurants.

Expansion into new markets has necessitated a different approach to franchise development. In the United States new store growth has primarily grown on a multi unit basis. 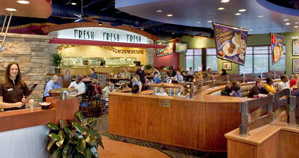 With 40 years of success, we have developed a unique and proven casual dining and sports bar concept. The Boston Pizza concept offers what many restaurants don't - two experiences under one roof - a casual dining restaurant and a bar.

Boston Pizza restaurants offer a casual dining atmosphere, with a fun and comfortable environment good for families, teams and groups of all ages.

This focus on building same store sales while adding new units has been an important strategic advantage over competitors and ensured that BPI's market share is achieved profitably at the unit level.

Expansion into new markets has necessitated a different approach to franchise development. In Western Canada new store growth has primarily continued on a single unit basis, i.e. one franchisee, one store.

In new markets BPI has adopted an area development model, selling area rights to larger more structured franchisee groups who have the resources necessary to develop a territory.